You can either pick your Korean voice talent from our voice demos or request a voiceover audition of your script. Just send us your project specs including audition age, gender, style, media, usage, markets and deadline. We’ll cast only the Korean voice actors we believe will be a good fit for your script and help you select the best professional for your localization project. 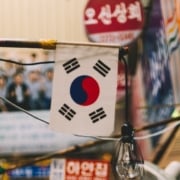 With about 77 million native speakers worldwide, Korean is also spoken in areas of China, Japan, Russia, Central Asia and the United States.

All Korean dialects are very similar and, for the most part, mutually intelligible. Standard Korean of both North and South Korea is based on the dialect of the Seoul area, although the northern variety has been influenced by the dialect of the North Korean capital P’yŏngyang after the Korean War (1950-1953).

Language differences between north and south started emerging when the Korean peninsula was split in half after WWII, with the new Korean nations incorporating vocabulary from their respective allies: North Korea from the Soviet Union (Russian) and South Korea from the United States (English).

Beside vocabulary, today the differences between the northern and southern varieties include grammar, spelling and pronunciation.