You can either pick your native Italian voice talent from our voice demos or request a voiceover audition of your script. Just send us your project specs including audition age, gender, style, media, usage, markets and deadline. We’ll cast only the Italian voice actors we believe will be a good fit for your script and help you select the best professional for your localization project. 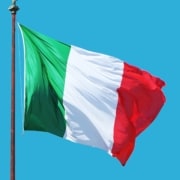 Italian (italiano) is an official language in Italy, Switzerland, Vatican City and San Marino. It is one of the most widely spoken native languages in the European Union with 67 million speakers and the second language for almost 15 million EU citizens.

Italian derived from Vulgar Latin and is based on the Florentine dialect, however its development was also largely influenced by other Italian dialects as well as by the Germanic languages.

Italian is used in musical directions and is therefore referred to as “the language of music” or “the lingua franca of classical music”. In fact, a number of Italian words are used internationally to direct musicians, e.g. presto, adagio, allegro.