You can either pick your native German voice talent from our voice demos or request a voiceover audition of your script. Just send us your project specs including audition age, gender, style, media, usage, markets and deadline. We’ll cast only the German voice actors we believe will be a good fit for your script and help you select the best professional for your localization project. 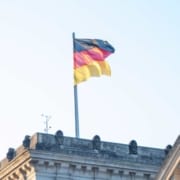 German (Deutsch) is the official and co-official language of several Central European countries and regions: Germany, Austria, Switzerland, Luxembourg, South Tyrol in Italy, the German Community of Liechtenstein and Belgium and the Opole Voivodeship in Poland.

In spite of its wide range of dialects, media and written content are now produced in Standard German (or Hochdeutsch, “High German”), which is understood throughout  all German-speaking regions.

Most of the German vocabulary evolved from the ancient Germanic branch of the Indo-European language, although a considerable number of words come from Latin and Greek and some are borrowed from French and English.