You can either pick your American English voice talent from our voice demos or request a voiceover audition of your script. Just send us your project specs including audition age, gender, style, media, usage, markets and deadline. We’ll cast only the American voice actors we believe will be a good fit for your script and help you select the best professional for your project. 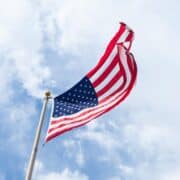 American English is the national language of the United States and includes a set of English language varieties with unified patterns of pronunciation, spelling, grammar and vocabulary that distinguish it from other English dialects around the world.

Sound has evolved constantly throughout the centuries. While many local accents have disappeared, several wide-spread regional accents have emerged in the last several decades.

American English has been greatly influenced by a number of languages and cultures. British-American colonists borrowed names for unfamiliar fauna from the Native American languages. E.g. moose, raccoon, opossum. Other colonizing nations also contributed to the American lexicon. E.g. kindergarten and cookie from German and Dutch.