You can either pick your Brazilian Portuguese talent from our voice demos or request a voiceover audition of your script. Just send us your project specs including audition age, gender, style, media, usage, markets and deadline. We’ll cast only the Brazilian Portuguese voice actors we believe will be a good fit for your script and help you select the best professional for your language localization project. 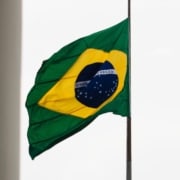 Brazilian Portuguese (português do Brasil or português brasileiro) is spoken in Brazil by almost 200 million inhabitants.

While Brazilian Portuguese and European Portuguese are very similar in formal writing, are mutually intelligible and share a predominantly Portuguese vocabulary, the spoken languages differ substantially.

Not only does Brazilian Portuguese sound different from the European variety, the Brazilian lexicon has also been influenced by a large number of languages over the centuries. From the Amerindian languages of the original inhabitants, to the African dialects brought in during slavery, to the languages of recent European and Asian immigrants.

Brazilian Portuguese has borrowed hundreds of words from English which have been fully incorporated in everyday use, especially in fields such as science, technology, finance, commerce, sports and culture.